Where Was the “Goin’ Over?”

Since Colonial times, the road-crossing of the Connecticut River (now Carmans River) at South Haven was known as “The Goin’ Over.” There are several references to that term in early documents and travel accounts. I do not know if the term was generally applied to all significant river fords, or whether it came to be more particularly applied to the Connecticut River crossing at South Haven — but in my readings I personally have not seen it specifically applied to other river crossings in this rather specific “noun” context, not only as a place of crossing but more generally as a place of community.

In reading the various accounts, and looking at maps, it seems that there were at least three separate crossings over time — one a simple river ford south of the present Montauk Highway bridge, a wooden bridge north of the present bridge, and the contemporary concrete bridge. There may also have been a fourth crossing that utilized the South Haven mill dam.

This is truly a piece of trivia, but my curiosity has been piqued. Could I actually discover where these crossings were?

This is a picture of the “second goin’ over,” a wooden bridge, probably located north of the present concrete bridge. There may have been several iterations of this bridge, and it may have been first constructed early in the 19th century, but given the light wood construction, it would have had to have been regularly renewed. The picture is probably early 20th century, late 19th.
As motorized vehicles became prevalent in the early 20th century, it would, of necessity, have had to have been replaced with the present concrete bridge.

In this picture, I’ve always felt that you are looking south, or downstream. The old mill dam would be at your back, and the picture below would be to your right. I suppose I think so because there is no hint of a dam or mill structures on the other side of the bridge. 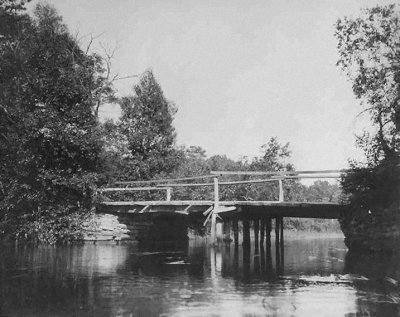 Why do I think the wooden bridge was north of the present bridge? A satellite view and a picture provides clues …. 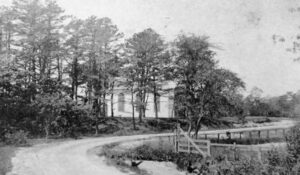 South Country Road and the Presbyterian Church at South Haven

Look carefully at the picture to the right, taken perhaps about 1900 or a bit earlier.
It is of the South Country Road (a.k.a. the Montauk Highway) in South Haven, and the old Presbyterian Church. The church was on the south side of the road, and it is therefore clear that you are looking west, and that the photographer is in the middle of the road to the east of the church. The road obviously curves. And I suspect nearly at the cameraman’s back is the wooden “goin’ over” bridge pictured above.

The modern Montauk Highway now continues on straight east at this point and now crosses the Carmans River just a bit to the left of this picture.

For several years I have traipsed around the Carmans River at South Haven, looking for archeological clues to how the roadways might have been originally arranged. Unfortunately, I thought, the Sunrise highway construction had so altered the site that visual clues were few. Even the memories of the old timers who knew the area well before the construction were dim and often conflicting. They remember the place “well,” but as a swimming hole with some old mill buildings. While they remember generally how Horseblock Road (sometime called Farm-to-Market Rd) merged into Montauk Highway at South Haven, and that the north-south River Rd. (Smith Road) was continuous through the hamlet, they never focused on what may have been remnants of old road right-of-ways, particularly with respect to where the by then defunct wood bridge “goin’ overs” might have been.
While it is likely that there still are site plans and maps in the files of the New York State Department of Transportation, these are not accessible to me at present.

It is clear from these accounts, however, that the mills and the associated dam was pretty much in the middle of the present Sunrise Highway. The original site of the South Haven Presbyterian Church is well known.

Recently, Google has made satellite views widely available through Google Earth. When I looked closely at the satellite view of South Haven, and compared the image with the photograph above, the evidence leaped at me.

In addition, the path defined by the dotted line is still maintained as a fishing access point by the New York State Conservation Department and the U. S. Fish and Wildlife Service. You cans still walk the path of the old “goin’ over.”

Satellite views of the “Goin’ Over at South Haven 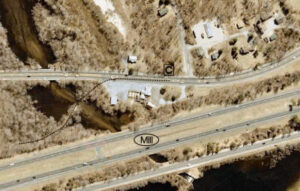