Return to Sites Table of Contents

Unless indicated below, this is a transcript of the original Society for the Preservation of Long Island Antiquities/Town of Brookhaven survey form. Corrections to obvious typographical and spelling errors have been made. Corrections to factual errors, updates or comments on the information are either enclosed in [square brackets], or will be clearly indicated as updated material. Since most of the surveys were conducted in the late 1970’s and early 1980’s, much of the information reflects that time period.

Sites with an Inventory Code suffix of “S” are supplemental sites not included in the original surveys.

The original site was a small farm owned by D. Benjamin Still and his wife Eva A. in 1923. 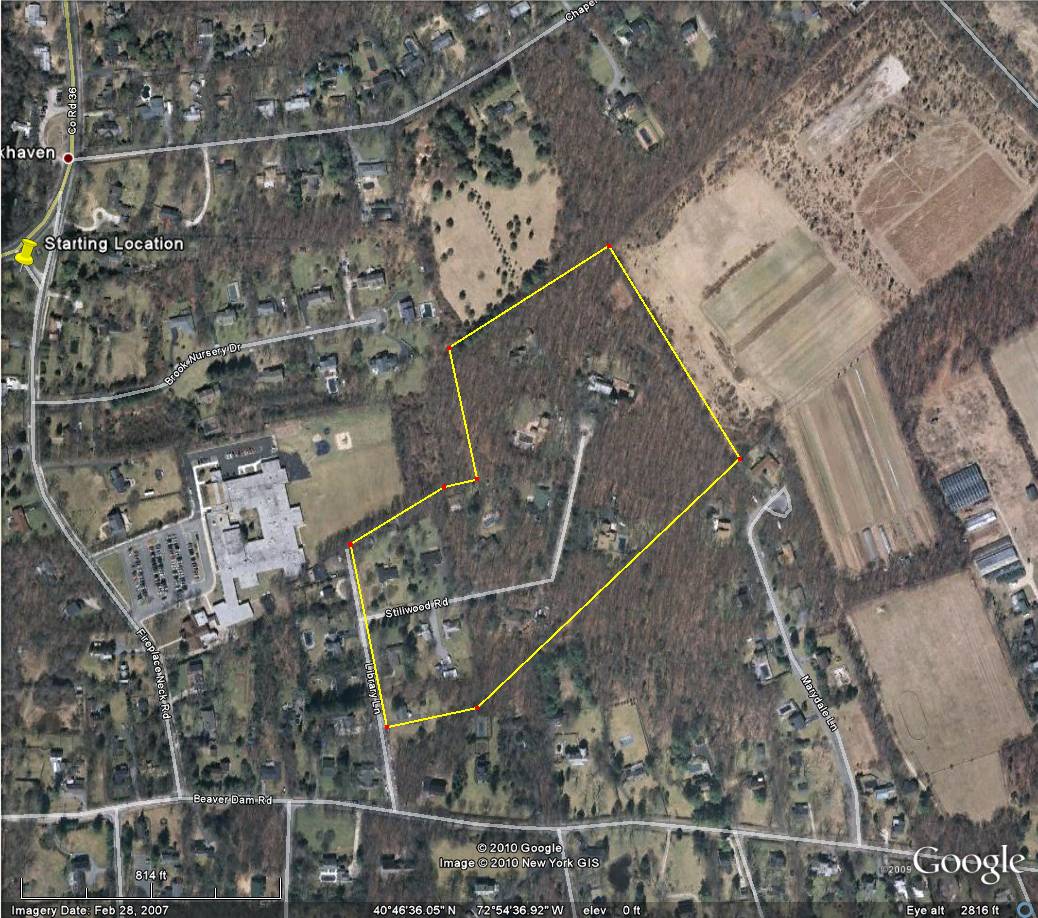 8-Local Attitudes Toward the Area

The following was researched and prepared by Richard Thomas, 23 February 2010:

The Still Farm came into existence when D. Benjamin Still and his wife Eva A. purchased land from James H. and Louisa Wells Post on March 29, 1923.

The deed appears below.
Three dollars in I.R.S. stamps were purchased for the deed, so the cash value of what was paid must have been between $1,000 and $1,500.  If there was a mortgage, however, the value of the premises may have been greater, since stamps weren't needed for the mortgaged amount.
In March 1923, Library Lane did not yet exist, it was a "proposed 50 ft. public highway."
Since the description of the property begins 250 feet north of the intersection of Library Lane and Beaver Dam Road, the southernmost Kinsella property (Lot 6 on the Tax Map) appears not to have been part of the parcel that was purchased.  [Since 03/14/2007  Lot 6 has been owned by Ron and Alan Kinsella and, by calculation, consists of 0.56197 acres.]
The Still property consisted of about seven acres.
A Google map of the approximate boundary of the Still Farm is attached.  Since the description of the property in the deed gives neither lengths nor angles, the boundaries shown are a guess.  I do not know whether the Stills called their farm "Still Woods" or whether the street name was a later creation.  The County computer systems shows some of the residents of Stillwood Road as living on Stillwoods and others as living on Stillwood, so one needs to search for both to bring up all the properties.
The deed indicates that the Stills were already living in Brookhaven in March 1923.

IN WITNESS WHEREOF, the parties have the first part have hereunto set their hands and seals the day and year first above written.
In presence of         JAMES HOWELL POST L.S.
——                    LOUISA WELLS POST L.S.
State of New York, County of New York SS: On the 30th day of March, nineteen hundred and twenty-three before me came James H. Post and Louisa Wells Post, his wife, to me known to be the individuals described in, and who executed, the foregoing instrument, and acknowledged that they executed the same.
L.S. Walter J. Vreeland Notary Public, Nassau County, Certificate filed New York Co.
Recorded 11th April 1923 @ 9 A.M.

D. Benjamin Still never used his first name, "David," even in legal documents, and he usually didn't use the "D." either.
He was a farmer and was active in the Democratic Party.
He was elected one of the five Town assessors in 1909 and was re-elected to the office in the following elections, serving a total of eight years in that post.  The Democrats appeared to have fared well during this era.  He later ran for Brookhaven Town Highway Supervisor on at least one occasion, but lost.
At the time the Stills purchased the property, Benjamin Still was 57 years old.
He was born on the family farm in Coram in about 1871.  He was the brother of George Wickham Still and the son of Lorenzo Smith Still and Ann Maria Terry Still.
Eva Still was the daughter of William and Martha Ruland Hammond of Patchogue.   Benjamin and Eva Still had two children, a son, Philip, and a daughter, Alice.
Philip Grayson Still married Miss Modjeska Sarah Holmes on 03 July 1916.  Philip was a machinist at the time of the marriage.  In May 1941, Phillip Still was residing in Sag Harbor.
Alice R. Still married Frederick Abrams of Blue Point.
Benjamin Still had served on the Coram school board.  After moving to Brookhaven, he served on the Brookhaven school board also.
In January 1932, Benjamin Still was appointed as Deputy Superintendent of Highways for the Town of Brookhaven for a two-year term at a salary of $7 per day.  He was re-appointed in 1934, but when it came time for his re-appointment in January 1936, he could receive only a one-year appointment since NYS law prohibited him from serving past the age of 70. His retirement in January 1937 was celebrated with a large party in Patchogue.
Benjamin and Eva Still continued to reside on Library Lane for the remainder of their lives.
Eva Augusta Still died at the home on November 12, 1940, at age 77. She was a member of St. James Episcopal Church.
D. Benjamin Still died six months later on May 7, 1941, at age 75, at the home of his daughter in Blue Point after an extended illness.
Both Benjamin and Eva were buried in the Coram Methodist Cemetery.
The son and daughter inherited the Still farm in equal shares.  Alice purchased her brother's share, and on June 7, 1947, she executed a deed from herself to herself and her husband to put the land in both of their names (Liber 2714  Page 173,  Alice R. Abrams of Blue Point to Frederick E. Abrams and Alice R. Abrams of Blue Point.)  There was also a "confirming deed," Liber 2815  Page 75, executed on March 31, 1948.
At some point a property on the north side of Beaver Dam Road and south of the Still farm was sold to the Blumes.  The parcel, consisting of about three acres, was located between the land of James H. Post on the west and the land of Elizabeth Morrow on the east.  Melita Blume was an artist and, in 1936, she was the president of the Association of Long Island Artists.
The southern boundary of the Still farm is called the "D. Road" in the Town assessor's description, but this road is not mentioned in the 1923 deed.  It is instead called the southern boundary of the Swezey farm.